We’re delighted to announce a donation of £1035.86 to local homeless charity, St George’s Crypt. The money was raised through the BML Print Shop – a unique collection of prints created by BML designers as part of the agency’s internal ‘Wall o’Fame’ challenges.

BML Creative Director, David Holloway said “It is fantastic to be able to support such a worthwhile cause as St George’s Crypt. The Wall o’Fame started out as a bit of fun – a chance for the team to design something free of the usual commercial shackles. The idea was simple: we pick a different topic every three months and our designers produce a response in their spare time. “Submissions from the team were brilliant – much better than any of us imagined. This was great, but it posed an interesting question, ‘what were we going do with them?’. We’re an ethically minded business and we all felt there was an opportunity to do something really positive. That’s when we decided to launch the BML Print Shop – an online store where all profits are donated to local worthwhile causes.” 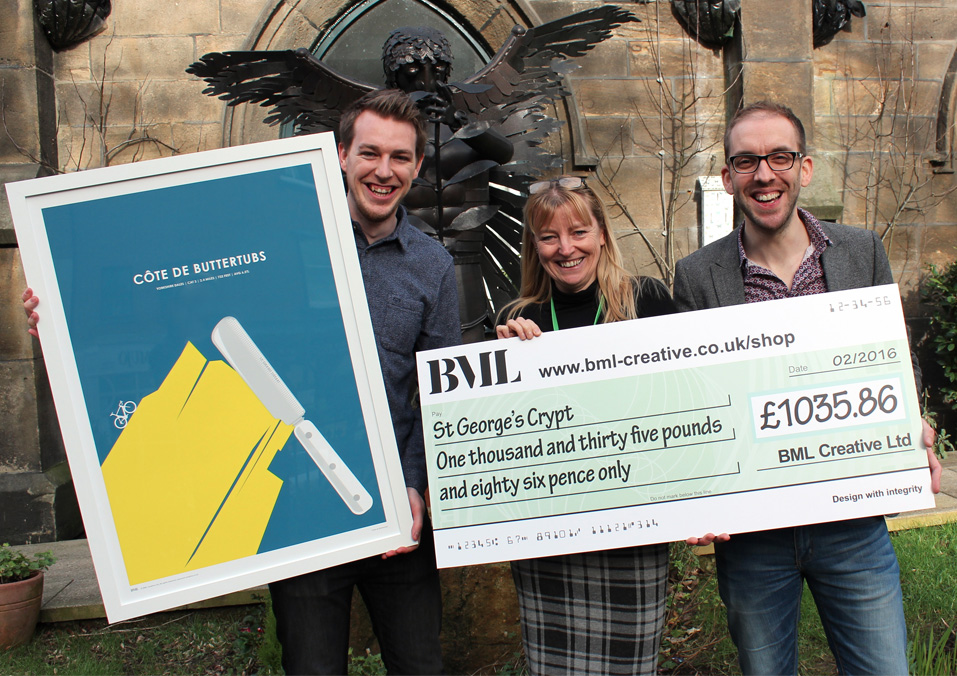 Prints on the store cover such diverse subjects as the 2014 Grand Depart and the 150th anniversary of Alice in Wonderland. They are printed to order by a fine art specialist in Harrogate and are available in a range of sizes from A4 to A1. Asked about the amount of money raised, Holloway said “We’re over the moon at the success its had so far. We’ve had orders in from all over the UK and even one from the USA!” The BML team chose to support St George’s Crypt as their inaugural beneficiary from any proceeds. BML Designer, James Lodge said “At the time we were choosing a charity last year, it was the depths of winter. We couldn’t imagine how anybody could cope living on the streets in such terrible weather. Having visited first hand, the work that St George’s Crypt do is truly inspiring and it’s great to be able to offer them this small token of support.”

Cheryl Harrington, lead Fundraiser at the Crypt said “we are delighted with the money raised by BML, which will go towards our training and engagement programme, helping to build up confidence and self-esteem in homeless and vulnerable adults, working towards a positive future.” We are currently selecting a new charity to support and look forward to raising even more money for worthy causes in the area through our design work. To view all prints and to make a purchase, please visit the shop.